Located at the top of the kidneys, the adrenal glands belong to the endocrine system and perform a number of important functions which include reacting to stressors and producing hormones such as cortisol and aldosterone.

Location of kidneys in the body, and the adrenal glands at top of each.
Image from: http://nethealthbook.com/

It is important that we understand that the adrenals are just a part of the way we react to stress and trauma. The need for my new ADRENAL BLEND has come as a result of the number of humans and animals that I have been working with who are currently suffering from various levels of adrenal fatigue. There are many symptoms associated with adrenal fatigue, and also different stages and levels. It can be difficult to diagnose since many healthcare professionals have little training in recognising or treating adrenal fatigue; and so it is often under-diagnosed and under-treated, especially in animals.

Having suffered with severe adrenal fatigue myself, I know what it takes to find a practitioner who can recognise adrenal fatigue and then support you or your animal to find your way back from such a condition. The adrenals can roller-coaster in and out of fatigue for years. Most commonly I hear my clients say that they are, 'beyond exhausted, sleeping poorly, experiencing panic and fear, have nothing left in the tank, are completely burnt out, have hit the wall, have got nothing left to give and they just want to be left alone'. Quite often tests show no abnormalities and we are told that there is “nothing wrong.”

Although the term ‘Adrenal Fatigue’ implies that the condition only relates to the adrenal glands, this is not true. We now know that it occurs when there is a depletion and under-functioning of neurotransmitters and hormones produced not just by the adrenal glands, but also the entire HPA axis (HYPOTHALAMUS-PITUITARY-ADRENAL axis); as well as the thyroid gland, and at times the reproductive glands. While we may think that the adrenals are the organs that are in control of our response to stress and trauma, it is in fact the BRAIN that is in charge! So treating the adrenals in isolation will not be adequate to overcome or prevent adrenal fatigue. 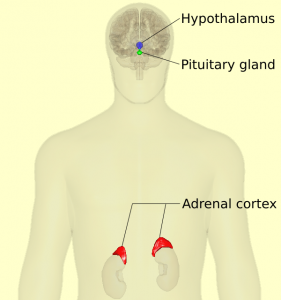 The HPA axis is a loop between the parts of the brain and the adrenals. The HPA axis constantly receives messages from our external sensory organs (such as the eyes, ears, skin, nose, etc.) allowing us to respond appropriately to a situation. The hypothalamus will continue to order the production of cortisol until the negative feedback loop kicks in and tells the brain the cortisol levels are high enough. When sufficient cortisol is produced, the negative feedback loop tells the hypothalamus and the pituitary; which then tells the adrenals to stop production of cortisol. During times of stress and adrenal depletion, resources focus on cortisol production and away from other hormonal pathways.

The hypothalamus is the instigator of messages to the pituitary, thyroid and adrenals and is the master of the HPA axis. It is divided into two parts: the Sympathetic (fight/flight/freeze); and Parasympathetic (rest/digest) nervous system. When the HPA axis starts malfunctioning, it leads to the condition known as adrenal fatigue. The HPA axis can also directly affect the immune system. Alarm signals from the amygdala in the brain activate the fight/flight/freeze response in the hypothalamus. Where certain parts of the brain’s feedback loops, and the brain itself, are being disturbed or fatigued by various stressors, there may not only be adrenal fatigue, but brain fatigue as well - which can lead to confusion, memory lapses, lack of concentration and being scattered. Activity in the HPA axis is usually high in the early stages of adrenal fatigue, and low in the later stages.

During times of stress, the HPA axis and the HPT (HYPOTHALAMUS-PITUITARY-THYROID) axis operate parallel to each other. Adrenal fatigue can also be associated with some sort of thyroid dysfunction. If the adrenal glands and the HPA axis are fatigued, the hypothalamus’s ability to respond appropriately and stimulate the thyroid into making thyroid hormones can also tend to falter. The pancreas is also affected by cumulative fatigue and exhaustion which can result in a craving for sugar. There is also often a craving for salt and fatty foods. Addison’s disease is where the adrenal glands can’t produce enough cortisol, which can result in symptoms such as depression, lethargy, weight loss, lack of appetite, vomiting, and diarrhoea. Cushing’s syndrome is a hormonal disorder resulting from the adrenal glands producing too much cortisol, which can cause damage to the body tissues if present in the blood over a long time. The number of cases of both Addison’s and Cushing’s syndrome is on the rise, especially amongst the dog population. 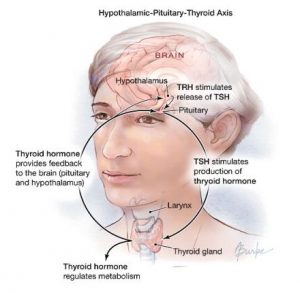 Adrenal fatigue is associated with severely depleted levels of neurotransmitters. Neurotransmitters are extremely important chemical messengers that deliver vital messages from the brain and adrenal glands to act on various cells and tissues in the body. When working well, our neurotransmitters help us to respond appropriately to a variety of stressors. When neurotransmitter levels are too low, messages that need to be sent are either not sent or are sent too quietly so the body cannot deliver the desired response. Low levels result in increased levels of fatigue, depression, anxiety and cravings. Neurotransmitters are synthesised from the proteins we consume as they are predominantly made of amino acids, so consuming high-quality protein is important.

As well as assisting the physical areas discussed above, the ADRENAL BLEND also assists in other areas that contribute to adrenal fatigue. Traditional Chinese Medicine has said for many centuries that unresolved emotions manifest in the body as physical illness or dis-ease. In her book, The Body is the Barometer of the Soul, Annette Noontil states that the adrenals are about, 'Loyalty to self [is] required for action – fears, doubt and no belief in self stops action so you do nothing'. Louise Hay in You Can Heal Your Life states that adrenal problems are about, 'Defeatism. No longer caring for the self. Anxiety'. The LIBERATION BLEND (which was discussed in a previous newsletter you can read on my blog here) came about as a result of the need to assist animals and humans who had ENDURED being 'scapegoats' or a dumping ground or being constantly drained by others. It works on assisting the individual to recognise, take control and set boundaries so that they do not have to continue this behaviour and be driven by the beliefs that allow it to occur. Unfortunately, by the time most recognise this cycle of behaviour, they have been enduring it for years and already have some level of adrenal fatigue. The ADRENAL BLEND works well with the LIBERATION BLEND to assist in healing what may be the result of years of behaving this way. The LIBERATION BLEND is the 'NO' to what has been taking place, while the ADRENAL BLEND is the 'YES' to bringing back to the self what is possible, because we are now able to say NO! Both these blends are quite strong with over 20 flower essences in each. Such a high number of flower essences was needed in both these blends, as the level of life force needed to say NO and YES needs to be strong.

The ADRENAL BLEND was made for those who have, or are, enduring any of the following and are now suffering some level of adrenal fatigue as a result:

The ADRENAL BLEND assists with both the physical and emotional aspects of adrenal fatigue.

If you have missed any of my previous newsletters about the Moonah Goddess Blends or are a new subscriber, you can read all about the first three combinations - BRAIN, COMPASSION and LIBERATION - here.

If any of this resonates for you or your animal, and you feel that I can be of any assistance, please don’t hesitate to read more about my services here, or you can get in touch directly here. Additionally, visit this page to learn more about attending one of my upcoming workshops.

Warm wishes to you all,

Share on TwitterShare on FacebookShare on PinterestShare on LinkedInShare on Email